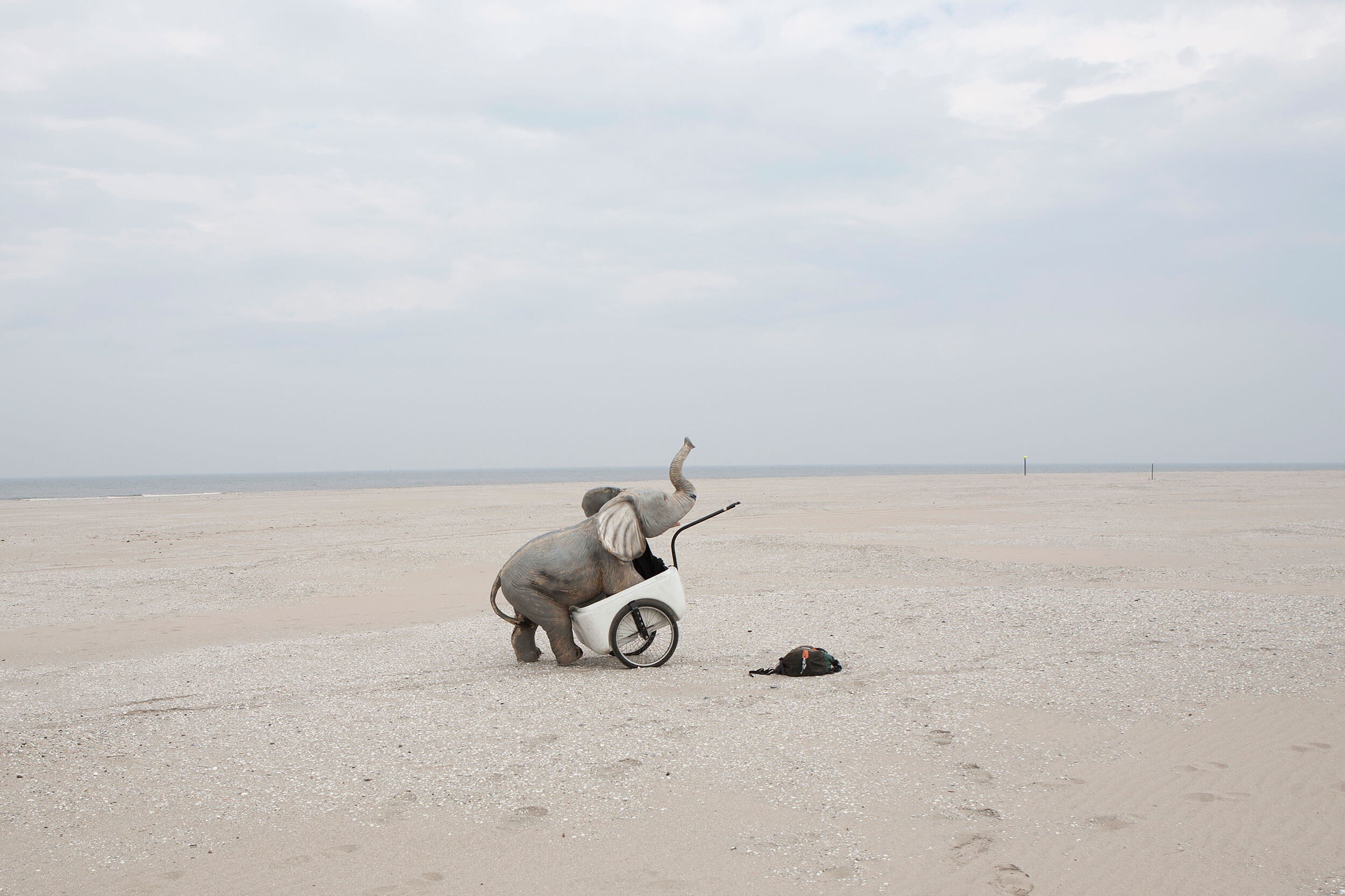 Animal is a group exhibition curated by Vasli Souza, exploring five different perspectives over the use of animals in today’s photography. The exhibition is not in any means an attempt to cover the whole animal kingdom or the history of animal photography. More so a brief look into how artists in a clever way use animals to raise questions concerning other important topics we as the humanity are facing. With a humorous approach, the human-animal bond takes on a new form.

In Thomas Nondh Jansen work, De olifant die niet wist of hij verdwaald was (The elephant that did not know it was lost), we are taken on a journey through the Dutch landscape following the footsteps of a lifelike, plastic baby elephant. Whether it’s resting alone at the beach, “parked” amongst two cars, or in a dialog with real life sheeps, this elephant has experienced it all. Jansen, who was born in Thailand and adopted by Dutch parents, searches for a place between the two cultures that he feels a connection with. He often wonders where he comes from and where he feels at home.

French visual artist Simon Wald-Lasowski uses mass-produced mundane objects as his key subject. With the URL, thereisanelephantintheroom.com, an endless stream of HD photographs, on what we can only assume is the greatest collection of elephant trinkets in the world, Wald-Lasowski questions the absurdities of the obsessive accumulations of goods encouraged by the consumer society.

Linda Hansen has won numerous awards for her portraits – of people. In her series Life in Plastic she shifts focus to the animal kingdom. Despite their lifelike appearance, the images blown-up are actually headshots of diminutive plastic figures. Here you can see every little detail of cracked paint and chewed up children toys, but as the title of the series reveals, Hansen’s project is broader in scope. The animals she renders so lovingly, become symbols of an increasingly inhospitable planet, a planet in which the sad chimp is pinned to the vivisectionist’s operating table, the factory-farmed pig is injected with antibiotics to combat the open sores inflicted by its crazed cellmates, and the wounded giraffe looks at us in bewilderment from a treeless world.

Everyone needs to get away sometimes, and what better way to do it than to step into an animal mask. Crazy Houses is photographer Mark van den Heuvel’s latest personal project, where he shows the process of a burnout he suffered a few years earlier. We are all just a small part of the global machine, and in the end, it will break down from the increasing amount of stress of today. Be aware, smile and relax.

All though Daniel Gebhart de Koekkoek’s work might not set out to save our planet, his series Jumping Cats shows an immense dedication from a photographer who spent hours and hours, week after week, years and years to document these lovely creatures flying through mid air. If nothing else, it might share a breath of fresh air, in another so grim world we are living.